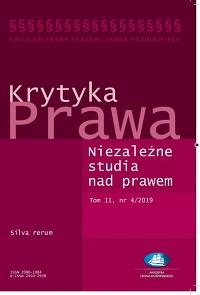 The author of the article draws attention to certain semantic contradictions appearing in contexts where the word „fact” is used in the language of legal acts and the language of legal practitioners. These contradictions pertain, in particular, to the possibility of attributing some logically exclusiv predicates, especially such as „true” & „untrue” and „existing” & „non-existing” to „fact”. This word is also key to an understanding of the legal notion of „truth”. The semantic collocation of „fact”, atypical for the expressions in general language, and the aforementioned predicates, suggests a specific and different meaning of the word „fact” in the language of legal acts and legal practitioners. „Fact” has been traditionally defined in Polish legal doctrine as a „fragment of reality”, so the stress was put on an ontological semantic component of the word. The author argues that such a notion of „fact”, in particular in the light of the legislator’s statements, may lead to language phenomena which are named by linguists as semantically „absurd” or „nonsense”. The pointlessness of expressions such as „untrue fact” or „non-existent fact” in the context of the general language consists of an inability to understand the meanings of these expressions. The author considers the possibility of regarding them as socalled semantic paradox, and the word „fact” itself as a „quasi-individual” name [nazwa quasi indywiduowa] or a hypostasis. He draws attention to the point, generally ignored in the literature by legal practitioners, that the word „fact”, as corresponding to a certain situation, is always expressible in the form of a meaningful sentence. Moreover, the language of legal practitioners, especially the language of judicial decisions, always associates an approving assertion to the notion of „fact”.